UNSW and the University of Sydney invite you to join the next Joint Physics Colloquium on The CUAVA-1 Satellite and Future Plans. (Join Zoom Here)

Two lead researchers in this activity, Professor Iver Cairns (USyd) and Professor Andrew Dempster (UNSW), will discuss the recent launch of one of two Australian-made satellites into space from Cape Canaveral, Florida on August 29 this year.

The successful launch demonstrates the important role Australian Universities have to play in furthering knowledge and expertise in international space research.  The CUAVA-1 satellite is an outcome of a collaborative tri-partite initiative between Australian universities, government laboratories, and the private sector to develop specialist image technology utilising starfields to guide navigation. 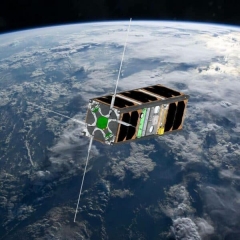 The CUAVA-1 is the first satellite of the Australian Research Council Training Centre for 'CubeSats, UAVs, and Their Applications' (CUAVA).  It’s also the third CubeSat for the UNSW – University of Sydney collaboration. This special presentation describes CUAVA, the CUAVA-1 CubeSat, and its instruments and aims and objectives.  The speakers will examine previous work and trace the steps to the recent launch achievement.  They will reference earlier collaborative work on CubeSats INSPIRE-2 and UNSW-EC0, which operated in space from 2017 – 2018 as part of the European Union’s QB50 Project.

Professors Cairns and Dempster will end their presentation with a brief description of future research plans, including: the CUAVA-2 and Waratah Seed CubeSats; GPS reflectometry and occultation; space weather and humankind’s space environment; and development of Australia’s space sector. For example, they will highlight the Waratah Seed; a ride-share satellite, funded by NSW Government with fees to come from payload providers.

Andrew Dempster is Director of the Australian Centre for Space Engineering Research (ACSER) in the School of Electrical Engineering and Telecommunications at the University of New South Wales (UNSW). He has a BE and MEngSc from UNSW and a PhD from the University of Cambridge in efficient circuits for signal processing arithmetic. He was system engineer and project manager for the first GPS receiver developed in Australia in the late 80s and has been involved in satellite navigation ever since. His current research interests are in satellite navigation receiver design and signal processing, areas where he has six patents, and new location technologies, and space systems, especially those related to extracting water. He is leading the development of space engineering research at ACSER.

Iver Cairns has over 30 years experience in space physics and space weather research. He is a Co-Investigator on NASA's STEREO mission and, since June 2019, on NASA's two new SMEX missions, PUNCH and TRACERS. In Australia he led the 2010-2019 Decadal Plan for Australian Space Science. Since then he has worked to "put runs on the board" to convince Governments to invest in the space sector. He led the INSPIRE-2 CubeSat project, which launched in May 2017 and re-entered still working in November 2018. He currently leads CUAVA, the ARC Training Centre for CubeSats, UAVs, and Their Applications, which is training people, solving research problems, and working on commercial outcomes for its industry, academic, and governmental partners. CUAVA’s 1st CubeSat, CUAVA-1 launched to the International Space Station on 29 August 2021 and CUAVA is leading Australia’s 1st ride-share satellite project, Waratah Seed, towards an expected launch in December 2022.