Hole-based artificial atoms could be key to spin-based qubit 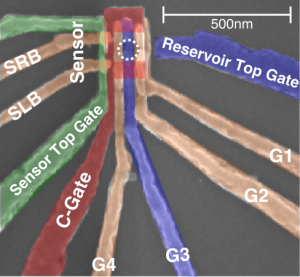 Defining holes Electricity is usually thought of as the flow of electrons. However, this is not always true: in semiconductors, electricity can also be carried by a different type of particle, called holes. In fact, holes are used in half of all electronic switches.

Artificial atoms (aka quantum dots) are nano-scale transistors so small they behave like synthetic atoms. Harnessing the quantum behaviour of individual electrons, such devices show great promise for a new type of ‘spin-based’ quantum computer, in which particle spin would provide an extra degree of freedom.

However, despite over 50 years of research almost all technological developments have focused on artificial atoms that use electrons. There is still very little understanding of holes. Could it even be possible to build an artificial atom out of holes. The new study, led by Scott Liles and Ruoyu Li at UNSW, is part of collaboration between Prof. Alex Hamilton in Physics and Prof. Andrew Dzurak in Electrical Engineering, and represents a key step towards making hole-based artificial atoms for quantum information processing.

“This is the first detailed study of the spin physics of an artificial atom with only one hole,” says Scott Liles, “so it’s a huge step towards bringing the understanding of holes back on par with electrons.”

Scott and collaborators from UNSW used precise control over the electromagnetic environment within these tiny, nano-fabricated transistors, to study the behaviour of artificial atoms with one to eight holes.

“Our results show that hole artificial atoms have very different properties to their electron counterparts. By understanding and harnessing the unique properties of holes, we will have more tools to develop new semiconductor electronic devices,” says Scott.

Holes, which sound like nothing, may just be the thing that future computers are made of.

The study “Spin filling and orbital structure of the first six holes in a silicon metal-oxide-semiconductor quantum dot” was published in Nature Communications today.

This paper reports the first measurements of a planar p-type silicon MOS quantum dot capable of operating down to the last hole. 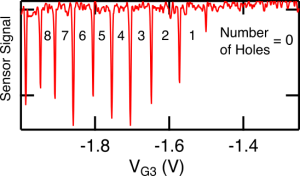 Sensor signal at increasing voltage (which controls the number of holes). Negative spikes correspond to removing holes one-by-one. Once no more spikes are removed, researchers know they have removed all holes from the apparatus.

Spin and orbital structures are characterised for the first six hole states in a surface-gated silicon MOS quantum dot (an ‘artificial atom’), consistent with theory.

These results are a promising step towards hole-based spin qubits, representing a stable, single-hole quantum dot operating in the same planar geometry that has already proven highly successful for electron-spin qubits.

In addition, silicon MOS technology has the advantages of compatibility with current industrial technology, allowing potential for scale-up to multiple highly-coherent, fast qubits.

Acknowledgements The work was funded by the Australian Research Council Discovery Projects Scheme and the US Army Research Office. Devices were made at the NSW node of the Australian National Fabrication Facility.

FLEET brings together over a hundred Australian and international experts to develop a new generation of ultra-low energy electronics.

The impetus behind such work is the increasing challenge of energy used in computation, which uses 5–8% of global electricity and is doubling every decade.