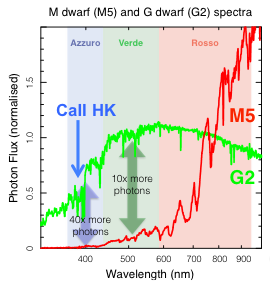 The $3m Veloce Rosso will go into operation at the 3.9m Anglo-Australian Telescope in in May 2018. It is specifically designed to be able to measure masses for low-mass, potentially habitable planets rbiting cool M-dwarf stars, as discovered by NASA's Transiting Exoplanet Survey Satellite mission. Veloce is a precision Doppler spetcroagraph that detects exoplanets by searching for the reflex Doppler wobble the induce in their host star, at velocities of less than 1m/s up to over 100 m/s.

Honours studenrs can be involved in undertaking observations with this instrument, developing calibration techniques, analysing data, and publishing results on new exoplanet detections and mass measurements. Our team will be concentrating on following up the first transit canddiates to come from the new NASA TESS satellite in S2 2018. Honours students can expect to help with the observing this semester, process data from Veloce, and eventually be part of the co-authors on publications from this very exciting period of Veloce's life!

PhD student could expect to be part of the Veloce team for the next few years, observing new transiting systems around Sun-like abd M-dwarf host stars, processing data, analysig the results and leading research papers on what those results mean for the search for potentially habitable planets orbiting nearby stars

The FunnelWeb survey will start operation in July 2018, and will undertake a ground-breaking survey of all of the bright stars in the Southern Sky. It is remarkable that the brightest stars – while the easiest to observe – have remained amongst the most poorly characterised. The largest extant all-sky spectroscopic star catalogue (the Henry Draper Catalogue with ~ 300,000 stars) was compiled using photographic material between 1918 and 1936 and extends down to only 9th magnitude. However, over the last 2 decades the focus of the highest priority science in astronomy has shifted to exactly this range between 9th and 14th magnitude. The time is therefore right for a major survey that can target these stars.

The FunnelWeb survey seeks to create the "HD Catalogue of the 21st century" by obtaining a spectrum for every stars in the southern sky down to I=12, supplemented by a spectrum of every object that might be an M-dwarf down to I=14. This is made possible by the TAIPAN spectrograph using the revolutionary new Starbug technology developed at the Australian Astronomical Observatory. TAIPAN can reposition its 150 on-sky apertures for the observation of a new field of targets in just minutes. This enables observations of large numbers of fields with short exposures so that TAIPAN can obtain moderate-resolution spectroscopy (λ/Δλ ≈ 2300) for huge numbers of bright stars. This capability makes possible a survey of unprecedented scale and scope in just a few years, obtaining spectra for millions of stars distributed over the entire sky accessible from the South.

Honours students could work on the the analysis an intepreations of specific subsets of this huge database - for example M-dwarf stars, or binary stars, or white dwarf stars - identifying new previously unknown examples, classfying them with the new spectra and publishing results.

PhD students could undertake a larger research program - for example identifying previously unknown M-dwarf stars, and then searching in the full-frame images from TESS to see whather those stars show evidence for transits, and then following them up with Veloce to measure masses. M-dwarfs are exciting targets, because small planets orbiting at the periods to which TESS is sensitive, could also be potentially habitable!

Both FunnelWeb and Veloce strategically link with NASA's next exoplanet survey mission - TESS. NASA’s Kepler mission has revolutionised our knowledge of the Galaxy’s stars and planets‡. But it has its problems, which include observing only faint stars clustered in a single northern field. Even more critically, its target stars were barely characterised when Kepler launched, and remain so to this day. Since what we know about Kepler’s planets relies on how well we understand its stars, this is a serious issue. The TESS satellite – with its all-sky survey of brighter stars that can be more readily followed up – is set to once more revolutionise our understanding of exoplanets (planets orbiting other stars). But for TESS to fully exploit its potential, its target stars must be fully characterised.

TESS launched on April 16, and will carry out very cool series of manouvers over the next few months before its starts an all-sy survey for new transiting systems.

Figure: Left. | The instantaneous combined field of view of the four TESS cameras. Middle. | Division of the celestial sphere into 26 observation sectors (13 per hemisphere). Right. | Duration of observations on the celestial sphere, taking into account the overlap between sectors. The dashed black circle encloses the ecliptic pole.

FunnelWeb can obtain a high-quality spectrum for every southern star that TESS can observe, delivering an input catalogue that (a) contains no giants or double-lined spectroscopic binaries around which exoplanets cannot be found, and (b) provides a stellar temperature, surface gravity, metallicity and radial velocity in advance for every star that TESS can observe. This will make it possible to interpret TESS results on planet frequency and system architectures as a function of host star mass, age, and stellar population in a direct and rapid way that has been problematic for Kepler without the investment of hundreds of nights of large telescope time (valued at tens of millions of dollars). FunnelWeb can carry out those characterization observations in advance of TESS launching for a fraction of this cost.

Veloce is specifically designed to allow follow-up of these TESS planets to deliver masses. The combination of Veloce masses and TESS planet sizes tells us the planet density, and thistells us whether these planets are rocky or icey!